I have managed to avoid it so far in life, but being on the wrong side of 25, it was bound to happen at some point: “Can we go to Ibiza for my hen-do?”

My inner guitar-loving self screamed and cried and my anxiety levels shot through the roof. The thought of short-shorts, wearing heels in the sun, glitter, outfits that would make your parents disown you, the list goes on…it literally gave me the fear!

You would normally catch me enjoying bands in little independent music venues. With there being about 6 bands between my group of friends, there is always one I am off supporting here and there, more or less every weekend.

After much deliberation and 80% of my Skiddle colleagues convincing me: “you’ll be fine”, “you will love it really”, “it’s such a beautiful island” – off we trotted to Manchester airport, 5 school friends, donning matching ‘BRIDE TRIBE’ t-shirts. 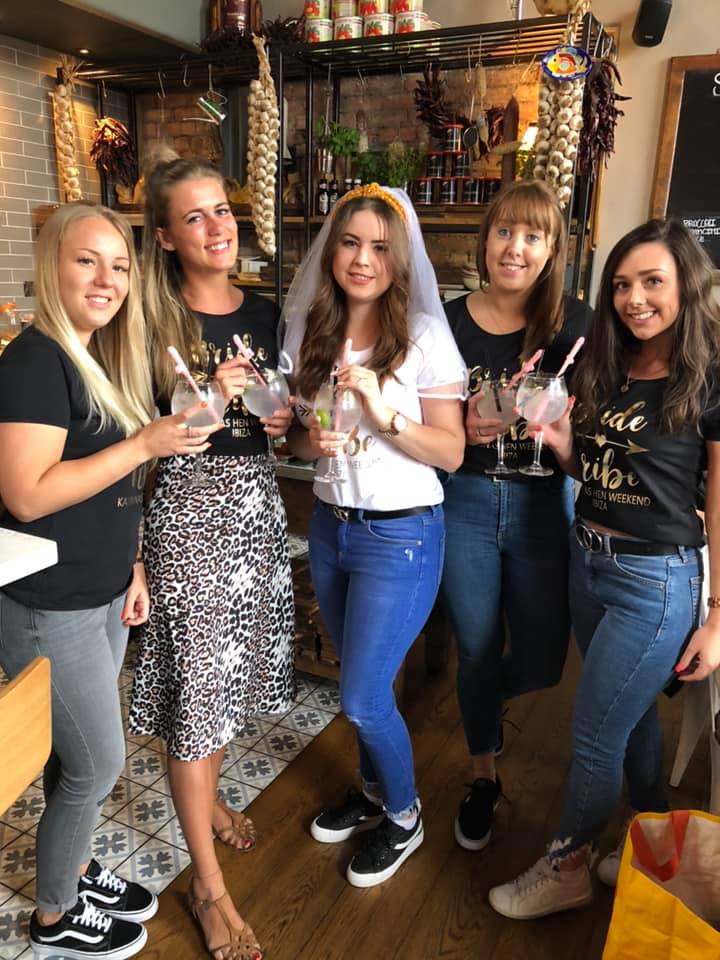 We landed in the White Isle not long after midnight, a few bottles of wine down on the plane and feeling just a bit fuzzy-headed.  It was agreed that we would head straight to the hotel and get ourselves an early night ready for the following day’s carnage. The wine must have done the trick because considering our balcony looked over the entrance of Ibiza Rock hotel – I was out like a light.

The day was here…..OCEAN BEACH.

On the glitter went, the wedges were on. We were ready!

We attended Soul Heaven which is held at the renowned Ocean beach club every Saturday and I must admit, I really enjoyed it! The sun was shining, the extremely disgustingly overpriced alcohol flowed and the music played non-stop all day long. It is a poser’s paradise, do not get me wrong, but my favourite pastime is people-watching and it ticked every box on that front.

Oh and look who I bumped into there, only our very own Ticket Dispatch Queen, Corinne! 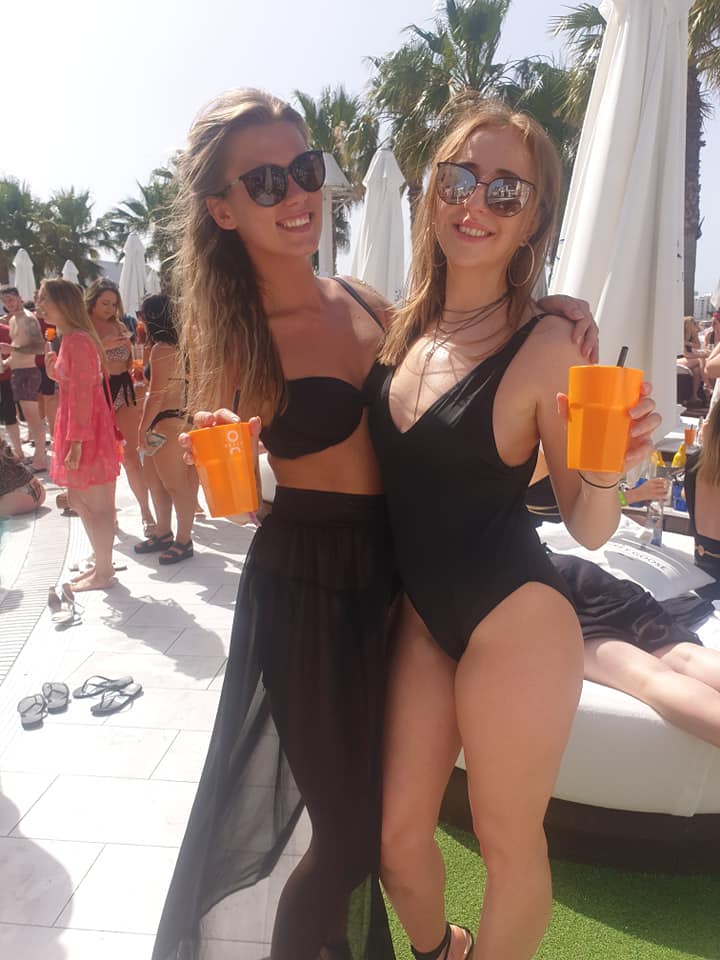 The memo must have got out that the Skiddle girls were on tour because according to Wayne Linekers Instagram, even Ed Sheeran came to join the party!

The lack of a hangover the day after drinking and partying from 2 pm until the early hours, was quite worrying yet impressive. The plan of attack for Sunday was; beach day, the iconic Cafe Mambo for the sunset and then Glitterbox at Hï Ibiza.

People are not wrong when they say that the view of the sunset from San Antonio’s famous sunset strip is beautiful. Cafe Mambo held host to the Glitterbox pre-party, so it was the perfect place to get in the mood for the night ahead. People flocked to the rocks to watch the sunset which was celebrated with a great cheer and followed by the Glitterbox flamboyant dancers entertaining the crowds. 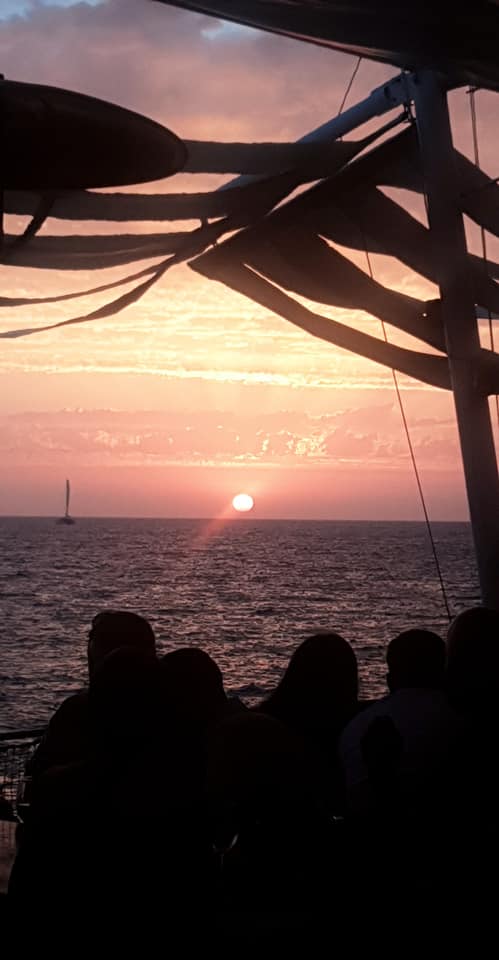 After a few jugs of Sangria and a bite to eat we were ready to fully enthral the spirit of 21st-century queer disco and jumped into a taxi over to Hï Ibiza on the other side of the island in Playa d’en Bossa.

Now again, I am not one to know which DJ is who, but as long as I can sing and dance-along I am happy. I was taken aback when trying to nip to the ladies. The bathroom was absolute carnage with its own DJ playing away in the middle. Yes, a DJ in a bathroom. I mean, If that isn’t Ibiza all over, then I don’t know what is! It was brilliant!

The garden was decked out with tee-pees, glitter balls, waterfalls and palm trees, it was pretty impressive! 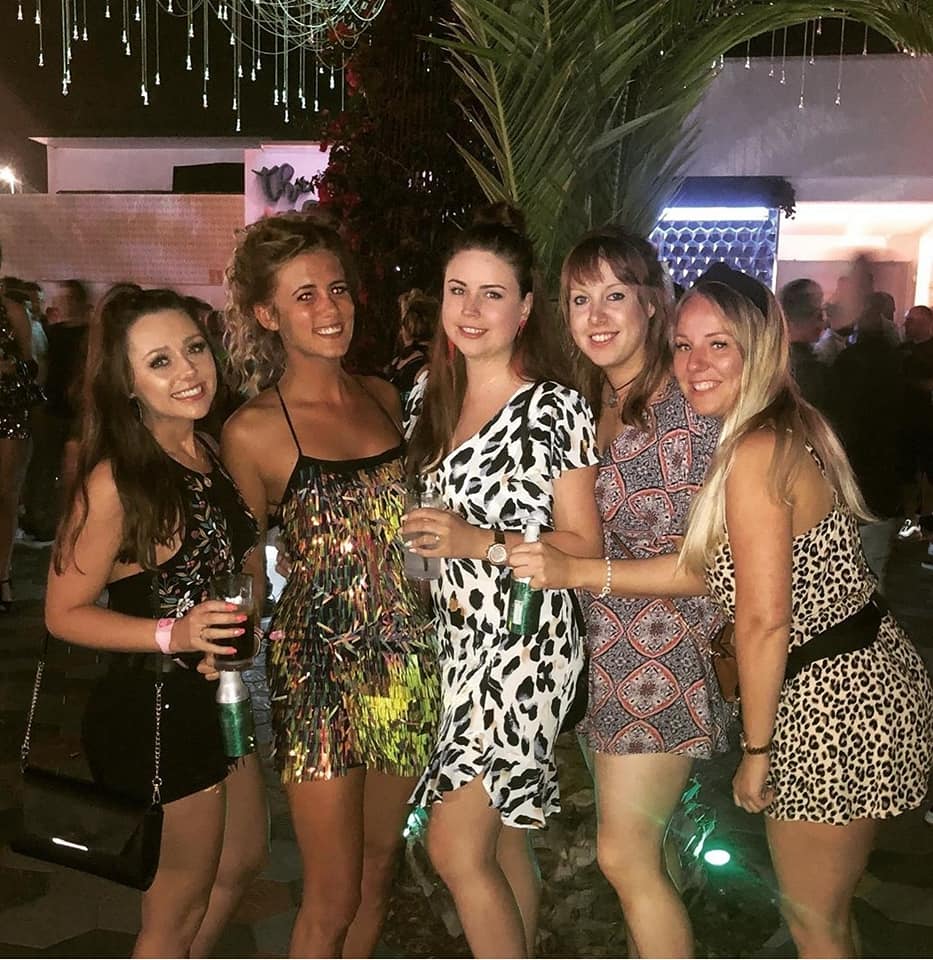 We managed to catch a night where the fabulous Kathy Sledge was the live PA for the night and after Sister Sledge’s memorable performance at Highest Point Festival in May, I was not missing this.

So, all in all, my brief trip to Ibiza left me on a huge ‘Hï’ and I will most definitely return. There is so much more of the island that I would love to see and do. Although clubbing is not my forte, I’m sure I can let-loose for at least one night, eh?

Next up was the Isle of Wight Festival just 36 hours later, may I add – help!