The Happy Mondays fell apart in 1992, leaving most observers to assume that it was the end for Shaun Ryder, as he struggled to recover from his numerous drug addictions. No one could have ever predicted that three years later, a relatively fit and healthy Shaun would return to the top of the charts, with a new band. 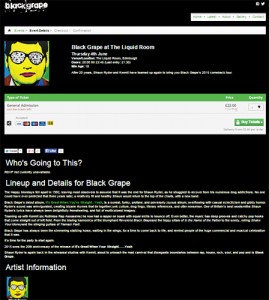 Skiddle worked with the management to provide a full white label page integrated and styled to suit the band’s website, which allows the promoter to sell direct through their own website.

Alongside this we produced editorial content which is unlike most ticketing agents – Skiddle has the use of  What’s on guide which can help promote events and generate into sales.