Celebrated trance brand and nightclub Gatecrasher unleashed one of its most anticipated events in recent memory back in June – Gatecrasher Classical. As part of its 24th birthday celebrations, the new event will see an as yet unannounced 50 piece orchestra re-imagine some of ‘the lion’s’ most euphoric floorkillers, a format that fits completely with the music it’s emulating. The announcement of Gatecrasher Classical was understandably a big deal, and one that trance and dance music fans from across the country were itching to be a part of.

Unlike the raucous clubnight, Gatecrasher Classical will be a mostly seated affair (although getting up and dancing is actively encouraged), taking place at Sheffield City Hall. This presented a whole new challenge for Skiddle, and after extensive work from the ticket outlet’s development team, a new way of ticket-buying through allocated seating was introduced. Here’s how it all unfolded: 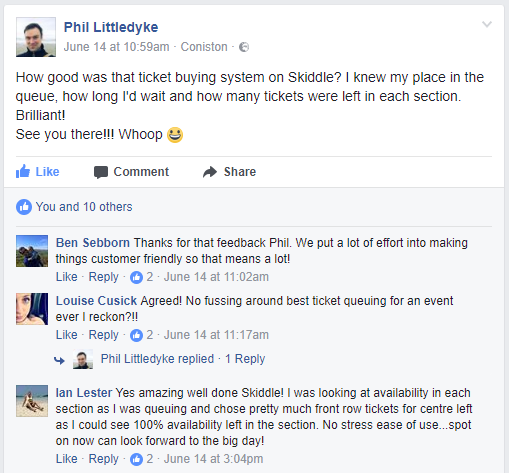 “The queuing zone was great and worked perfectly.”

“I thought it was a good idea, better than having to keep trying and the page not loading“

“Just thought I’d let you know how great I thought the queuing system was for Gatecrasher Classical. It made the ticket buying system stress free. Probably the best I’ve seen. All the info I needed for wait time, place in queue and remaining tickets in all areas.”

“The queuing system was excellent, I knew my position the whole time, it continuously updated. It was so efficient and worked wonderfully. It was particularly great how I was updated on the percentage of each ticket left. Very impressed!”

“That was one of the best most proactive ticket queuing system i have had the pleasure of using. I loved the fact you could watch how much longer it was going to take by both minutes and place in queue ( number of people in front of you ).

Also the ticket availability tool was great to be able to see availability by area as a percentage. Just prior to being able to buy meant you could make a dedicated decision on which area you wanted to sit by noting how much availability there was. For instance I wanted centre circle but was hoping to be sat near the front row – I could see prior to having opportunity to buy that ticket sales were already going in that area so chose circle left and nabbed near on front row tickets as i could see availability was good.

A lot of ticket companies could learn from you guys, a very stress free ticket purchase well done 👏”