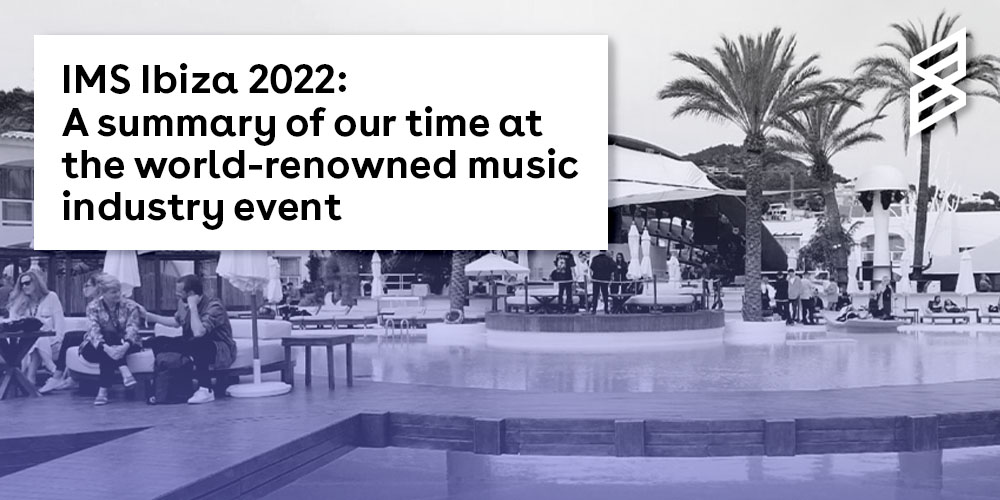 IMS Ibiza 2022: A summary of our time at the world-renowned music industry event

The International Music Summit, or IMS for short, made its long-overdue return to Ibiza last week, throwing its first in-person industry get together since the COVID pandemic broke out, back in 2020. And we were there to experience it!

As the official ticket vendor and one of the brand sponsors of this year’s three-day event, we felt it was only right to show our faces. So, we boarded a plane and headed out to the five-star Destino Pacha Resort Hotel, the venue of IMS Ibiza 2022, to meet and network with the delegates in attendance, whilst also listening in on keynote speeches and interviews from some of the most respected professionals and artists around.

The first order of the day, a lush continental breakfast was quickly followed by the opening remarks of IMS Ibiza 2022. BBC Radio presenter, popular DJ and co-host of this year’s industry gathering, Jaguar Bingham, otherwise more commonly referred to as Jaguar, kick-started proceedings alongside the co-founder of IMS, Ben Turner who took to the stage to thank delegates for making the trip out to the Balearic dance mecca.

As the opening words concluded, stages across the site began to open and the punters began to arrive in their droves. After grabbing some essential hydration, as the Mediterranean sun began to burn off the early morning cloud, we headed to the IMS College to learn how to make our very own digital instruments. The college, powered by Beatport, Microsoft Surface and Point Blank Music School, featured an artist-led workshop held in the world-famous Tox nightclub, looking at how instruments can be created out of nothing more than vocal recordings.

Minds blown, we decided to take a short stroll across the hotel complex to The Art of Arete villa to decompress. Purposely positioned away from the hustle and bustle of the main event, the villa provides all attendees with a place to relax and rebalance, whilst also offering tools to help with the stresses that come with working in a high pressure industry, the likes of the music industry. We arrived and immediately got involved with a breath-work workshop and meditative sound bath session.

Hours later and with a spring in our step, we headed back over to the epicentre of the summit to catch the man, the myth, the legend, Pete Tong MBE in conversation with another icon, Global Head of Music at YouTube and Google – Lyor Cohen. Many interesting stories and anecdotes were shared between the pair, including behind the scenes tales of signing talents the likes of Run DMC, as well as insider knowledge on the future of the giant social media platform.

We continued to bounce around the event space throughout the day, stopping off at stages run by YouTube, looking at innovations being made in short-form media, and the Shesaid.so community, looking at ways in which the industry can support and empower female professionals operating in electronic music. We also managed to squeeze in a few interviews with some pretty well-known and respectable names, caught hanging around the pool. Keep your eyes peeled for footage of said interviews coming soon.

At sunset, the lights across the stunning resort began to come alive. The drinks started to flow and the volume of the never-failing house music continued to rise. Day one was done and the party atmosphere had arrived.

Plenty of sore heads emerged from the many rooms and villas scattered across the sprawling resort on the second day of IMS, somewhat understandably, after a night of partying and live music in Tox Club Privé, the hotels on-site club. However, once refuelled at breakfast, it didn’t take the delegates too long to recover before normal business resumed.

From the outset, today’s keynote discussions leaned heavily on blockchain technology, NFT’s and Web3, a relatively new concept providing a novel iteration of the World Wide Web on blockchain platforms. Representatives from some of the biggest brands and organisations in the field, including PIXELYNX, the startup founded by dance icons Richie Hawtin and Joel Zimmerman aka Deadmau5, The Sandbox, a virtual world in which players can build, own and even monetise their gaming experiences in the Ethereum blockchain, and Zora, a ‘universal media registry protocol’ that allows content creators to own and share their own NFTs, were on hand to explain the positives and negatives of the technology.

After digesting and not quite fully understanding each of the conversations, the Skiddle team decided it was about time for a break. Heading away from the Destino Resort and up into the hills, we embarked on a journey to the island’s supposedly mythical, magnetic and energy dispensing monolith – Es Vedra. After getting lost, down more than one unforgiving dirt track, we eventually arrived at the impressive landmark to be greeted by cloud cover and intermittent rain. Catching a glimpse of its majesty in a brief break, we took in its splendour and made our way back to the hotel, making it back just in time to catch the Lady in the House takeover at the Shesaid.so space.

Hosted by Laila McKenzie, founder and co-author of Lady of the House, conversations included some of the biggest names in the electronic industry, from BRIT award-winner Becky Hill to up-comer, TSHA, discussing how the industry can further assist in championing females from black and queer communities, as well as the non-binary. Very emotional in places and from start to finish completely engrossing, we were glad we managed to get back to the venue in time to catch these talks.

Enlightened and moved close to tears, we upped from our positions at the Shesaid.so space to begin our preparations for our own Skiddle social by the main pool. The networking occasion, complimented by free beverages, continued long into the night with DJs providing an ethereal customary-Ibiza sunset soundtrack as the delegates mingled. A fantastic conclusion to a fantastic day.

Following two days of changeable weather, the sun mercifully came out for the third and final day of the International Music Summit 2022, drenching the Destino Resort and all its IMS delegates in warm summer rays. Besides the look of the hotel complex changing drastically underneath the sunlight and clear blue skies, new additions were also to be found across the resort. Banners and visuals emblazoned with the words ‘Duran Duran’ to be specific.

The internationally-acclaimed new wave group had touched down on the white isle ahead of their ‘Touch the Sunrise’ series of events, including a club night at Pacha, an exclusive film screening, and a very special open-air concert at Ushuaïa. Beginning with a keynote speech in the Summit Suite at the International Music Summit, the opening of the seven-day stretch would also feature friend of the band and Phantasy Sounds boss, Erol Alkan, delivering the party vibes later in the evening.

Apart from our own keynote speech with Director of Event Horizon, Wilf Gregory, looking at the company’s twenty-year history in live events, the main attraction of the day was obviously the closing party at Dalt Vila.

Held at Ibiza’s UNESCO World Heritage site, the Dalt Vila, easily one of the most stunning places the Skiddle team have ever partied, the seven-hour-long experience saw sets from the likes of Prospa going back-to-back with IMS co-host, Jaguar, Patrick Topping, Joy Orbison back-to-back with Overmono, TSHA, and Jamie Jones and The Blessed Madonna, who smashed out the final set of the night together on stage. A short walk into Ibiza Town and after a spot of late-night Lasagne, the Skiddle team rounded up, grabbed a taxi and departed back to the hotel.

And just like that, IMS Ibiza 2022 had concluded for another year. We met some fantastic people, saw many interesting keynote discussions and interviews, and danced probably a little too hard to the sounds of some of the best DJs around. Will we be back next year? You can count on it!