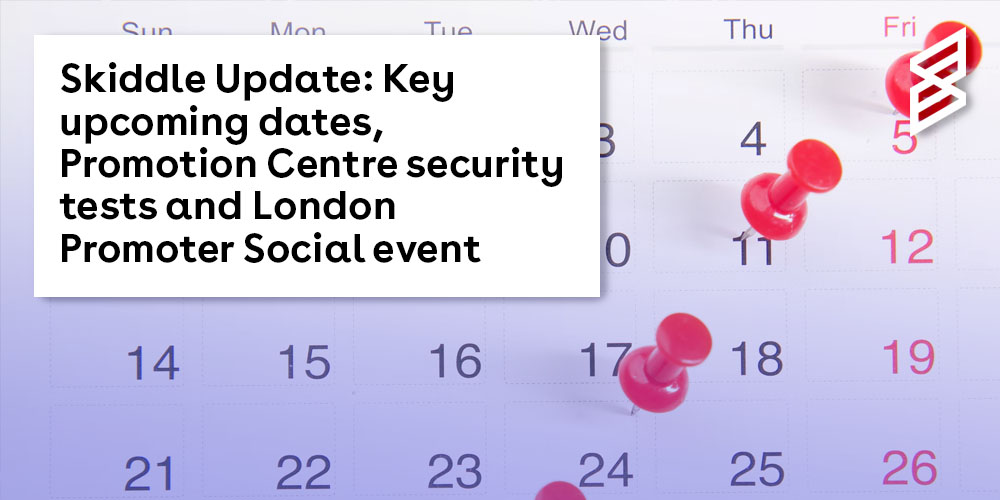 With signs of finer weather on the way, and with some pretty important key dates and changes also en route, we thought now would be a good time to reach out, to make sure you’re aware and prepared for the rush of Bank Holidays and national days of celebration etc, just around the corner.

We’ll also be sharing some more details regarding our upcoming panel appearance at the NTIA’s (Night Time Industries Association) Night Time Economy Summit in Bristol, this April, as well as news on our first promoter social event in London in over three years, and the latest updates on the Skiddle Promotion Centre. Let’s dive in!

March signifies the welcomed end of the winter months and the beginning of the spring. It’s also a month that closes with two significant changes, both in terms of time and finance.

On the last Sunday of the month, the clocks go forward at 1 am meaning nightclubs, venues, promoters and the punters inside get one hour less partying time. It’s important that this is reflected when making your listings live, if you have an event scheduled to run through the evening of Saturday 26th March into Sunday 27th March. It might be worth considering an earlier start time to your event, it is, after all, a payday weekend and the final weekend to make the most of that reduced VAT rate!

Remember – the current VAT rate is set to return from 12.5% to the standard 20% on Friday 1st April.

VAT and Daylight Saving Time aside, there’s also the Easter Bank Holiday to look forward to, followed by Mother’s Day in early May.

We’ve seen an enormous increase in search volume and traffic to landing pages featuring attractions over the past few weeks – from theatre shows and exhibitions to theme parks and more – and it doesn’t look to be slowing. If you’re planning on listing events taking place over the Easter holidays or Mother’s Day, now is most certainly the time to make them live on Skiddle.

As part of our commitment to ensuring your information and data is secure, our development team have been working closely with a security consultancy over recent weeks. The focus of this engagement was to perform in-depth security testing of the new Beta Skiddle Promotion Centre.

We’ve used a team of the best professional ‘ethical/white hat hackers’ to perform rigorous security testing of every feature currently available to you, plus a host of new features which are soon to be released, such as multi-user access, financial settings and reporting.

The testing engagement has reported that the Beta Promotion Centre has no vulnerabilities. As such you can be reassured that Skiddle treat security as a very high priority and the features we’re rolling out to you on a regular basis are secure.

Take a look at some of the new features and improvements that are now live and available to test out, on the Beta Promotion Centre:

We are hosting our first London promoter social in over three years next Thursday (24th March) at one of the newest live music spots in the English capital. The first of many events celebrating our 21st year in the business in 2022, the gathering will offer the opportunity to meet and catch up with members of the Skiddle team, whilst enjoying the plentiful complimentary drinks and food on offer. For more info and to get your hands on an invite, simply get in touch by sending an email to Duncan King at duncan@skiddle.com