Despite signing a Harvey Goldsmith petition which deplored the practices of the secondary ticketing market and its industrial scale exploitation of fans, it’s been alleged that Robbie Williams and his management team ie:music has been putting tickets for the singer’s upcoming tour directly onto Get Me In and Seatwave, at inflated prices.

As investigated by the Victoria Deryshire programme for the BBC, some ‘Platinum’ seats, located one block away but on the same level, were listed for £65 more on Seatwave than they were on Ticketmaster, the primary sellers. And while Ticketmaster owns Get Me In and Seatwave, the tickets were put straight on the latter, with a higher price tag. The wording on the site confirms that the tickets are directly from the event organiser, and that they had been priced according to demand. 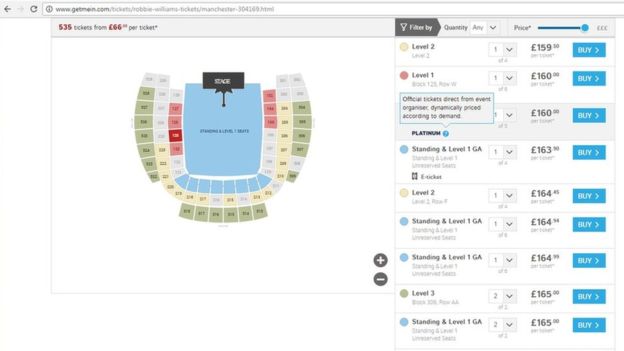 Ticketmaster gave the statement “Platinum tickets are a very small percentage of the best seats in the house that are priced according to demand, in consultation with our clients, the event organisers… The UK live events industry has been successfully using platinum for many years so that the full value of these tickets goes back to the rights holders and not to resellers.”

While it’s well known that touts have made a living from abusing the resale business, Department for Culture, Media and Sport MP Andrew Bingham conceded that artist management teams were “now also complicit in it as well”.

Another issue that was investigated was that for high end sellers, StubHub, Seatwave and Get Me In were providing tailor made software to help them shift even greater numbers of tickets, despite both speaking out about the use of ‘bots’ to harvest large amounts of tickets for resale purposes.

You Me At Six frontman Josh Franceschi, who’s been very outspoken about the secondary ticketing market and appeared at the initial parliamentary debate, has since blasted Robbie Williams’ management team as “greedy”. In an interview with BBC News he also said “Your tickets are already £95 and you’re playing Wembley Stadium. You don’t need to make the extra money. You’re Robbie Williams”. Watch the clip here.

Neither Robbie Williams nor ie:music have replied to the BBC’s claims.

Head here to read about our stance on ticket touts.