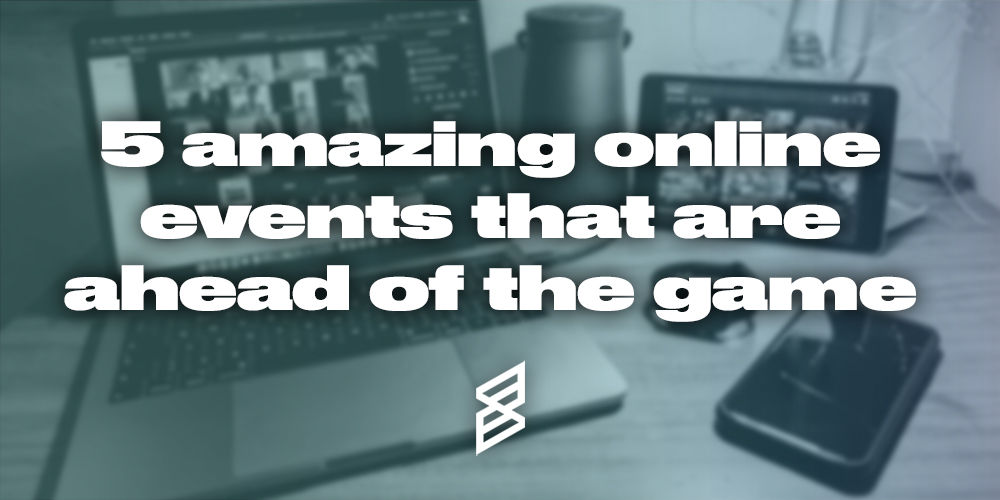 5 amazing online events that are ahead of the game

During COVID, we’ve seen some amazing event innovations including drive-ins and a wild array of online events and virtual events. While some online events have been hit and miss, there’s been some crazy innovative online events out there we’d like to pay homage to and inspire our promoters out there to get creative! Without further ado…

No BBL CLB is not a typo, but rather, an interactive online event experience claiming to keep the UK club culture alive.

Playing in groups remotely via Zoom, your ‘mission’ is to find the elusive BBL CLB venue by following a group of 4 friends who are desperate to find the rave. You control the storylines and after every scene you are faced with a ‘choose your own adventure’ style decision. Your choice of direction will either help or hinder your mission as you encounter some ‘interesting’ characters and situations. Once you manage to get past security and onto the legendary warehouse venue you’ll find Kasra, Halogenix & Particle playing live and exclusive sets, from the BBL CLB DJ booth.

Kasra founded Critical Music label, the acclaimed drum and bass label, and is widely regarded as being at the forefront of the modern underground scene. A passionate curator and DJ he has grown the label from humble beginnings to one of the most respected imprints in the genre.

A certainly unique and immersive experience we haven’t seen before!

Zoom Dance was created to help ease the burden of lockdown and the severe impact on night life as we know it. The series of Zoom parties is a place where you can dance and socialise with your friends, interact with the artists. Artists which include the likes of Ratpack, Nicky Blackmarket, Ray Keith, Sub Zero among many more. There’s even virtual smoking and backstage areas!

The first few events back in March 2020 had an outstanding response, so the team behind Zoom Dance have continued the concept nearly every weekend to now. Zoom Dance was not only helping with mental stress of lockdown but the team were also raising money for some key charities fighting against the COVID-19 outbreak.

“Our events have captured the attention of many big artists in the industry and we now see ourselves in the position to be able to book some really big artists. We’re sure the events will grow from strength to strength as a result. What’s better is that the majority of people that have attended have expressed they actually feel like they have just had a night out!”

One of Manchester’s finest gay bars, Bar Pop, have been offering drag bingo via Facebook live. The winners could walk away with £100 plus helping raise money for charity by attending the online event! To honour the release of a second season of Drag Race UK, the drag hosts will be reviewing each week’s episode with special guests! This one’s not to be missed.

Events are announced via the Bar Pop’s Twitter page and tickets are available via Skiddle.

4. Tomorrowland around the world: a digital festival

As mentioned in our article on event innovations last year, In July 2020, Tomorrowland launched a digital version of the award winning electronic festival. The event was a two-day digital festival with 8 stages and over 60 artists. The team at Tomorrowland collaborated with a creative agency to film brand new sets with over 60 of these artists on green screens set up all around the world.

Over a million tuned in (more than the BTS livestream) using pay-per-view tickets which cost 20 euros, rendering the show a great success.

5. Travis Scott in Fortnite: the best of virtual live music

Okay by now we know you’ve heard of Travis Scott’s live gig in Fortnite which was the live music event of the year in 2020. We couldn’t make this list without including it here, of course!

Travis Scott played to a whopping 12 MILLION users in the Battle Royale game Fortnite, setting a new record. Scott played for 10 minutes then released a new song, The Scotts, in collaboration with Kid Cudi.

Okay we know this will only be ground-breaking with artists that have a larger pull, but some smaller scale virtual concerts have been attempted such as this Everything Everything gig in virtual reality, which won an Music Ally 2020 recognition for most innovative campaign. The band looks as if they’re humans placed right into a game thanks to the Sansar platform, and fans could interact with the band in a VIP meet and greet after the gig.

If you have an artist with a dedicated fanbase, why not?